Komodo National Park
As I prepare to return to Bali the end of this week I've decided to revisit my first trip to Bali and Indonesia with photos from Komodo National Park.  I'll start with the Komodo Dragons on the Island of Rinca between the islands of Sumbawa and Flores, Indonesia in the Flores Sea.  This trip was my first live-aboard dive boat in June of 2008 on a charter of the Cheng Ho with the famous underwater photographer Cathy Church from Grand Cayman.  Next week I'll post underwater shots from Komodo before I hop on the jet airliner late Sunday, (early Monday really...). 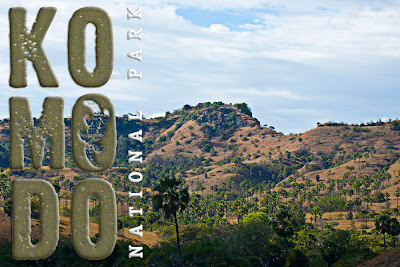 Komodo National Park was originally established to protect the rare Komodo Dragon later it's goals were expanded to protecting the entire biodiversity of the region both above and below the water. 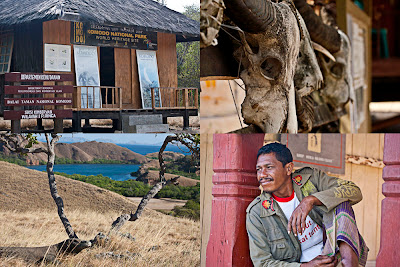 There are Ranger Stations on both Rinca and Komodo Islands.  We visited Rinca from sea via our aluminum un-sinkables from the ship the Cheng Ho. Several large Dragons lazed around the Ranger Stations and from there we took an hour hike over the island where we also encountered Dragons basking in the warm grass. 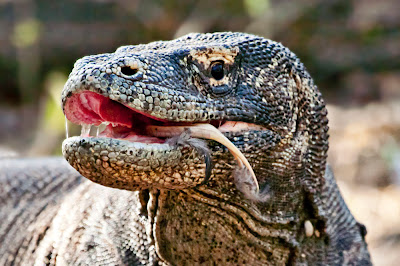 The Dragons have a doubly lethal combination of venom as well as infectious bacterial in their bites.  If you look carefully you can see this lizard is finishing a meal with feathers.  In 2009 two Dragons mauled a fruit picker to death after he fell out of a tree.  Muhamad Anwar, 31, was found bleeding from bites all over his body and died later at a clinic in neighboring island of Flores. 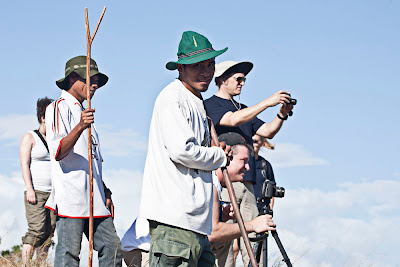 However I wasn't particularly worried about these fearsome predators as we were accompanied by guides with forked sticks... 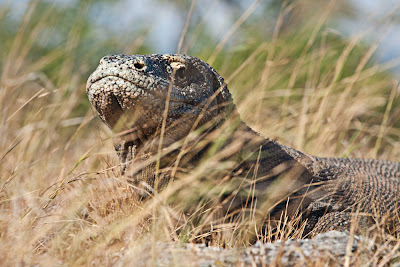 The Dragons are meat-eaters and can run at up to 12mph in pursuit of prey. Their young climb trees to avoid being cannibalized by the adults, which lurk in grass waiting for passing potential victims, typically deer or water buffalo and carrion.  They can consume up to 80% of their weight in one meal. 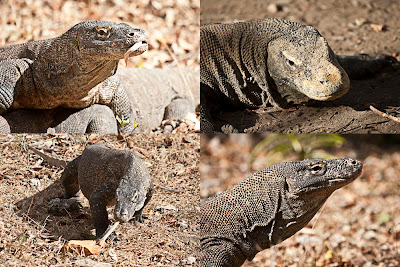 There are approximately 4000 Komodo Dragons living in the wild on the islands of Komodo, Rinca and Gili Motang.  The Dragons were not discovered by the scientific world until 1911 by J.K.H. Van Steyn.  The carnivorous Komodos live up to fifty years and can grow to over 3 meters and weighing up to 200lbs. 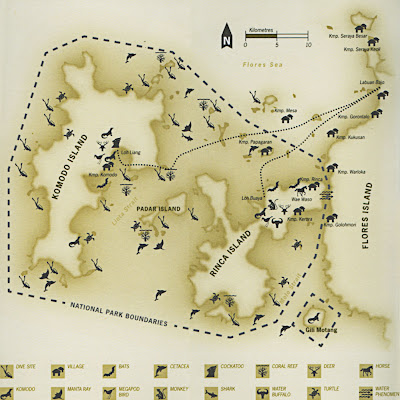 Komodo National Park was established in 1980 and became a World Heritage Site and a Man and Biosphere Reserve by UNESCO in 1886. 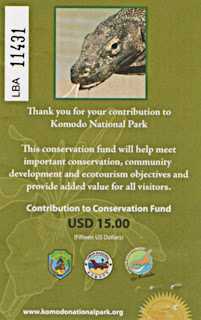 The Park is largely funded by ecotourism dollars. 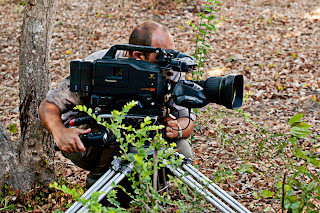 "Last week (23-30 Septmeber), the British Broadcasting Channel (BBC) completed Phase 1 filming in the Park for a segment of an ambitious new ten-part wildlife television series, LIFE, which aims to illustrate the wonders of the panet's biodiversity.  Each episode examines the diversity of an individual group of animals with the footage filmed in the Park forming the centrepiece of the episode on "Reptiles and Amphibians".  The filmmakers are using new high-definition cameras, super-high-speeed cameras, digital time-lapse systems, Hollywood aierial filming techniques and a lot of traditional patience to capture images of the Park.  Phase 2 filming - whereby a two-man crew stake out Wae Waso water hole on Rinca Island to capture on of the legendary, never-before-filmed, behaviours or the animal world:  predation by the Komodo dragon of the water buffalo - begins this week.  The series will be transmitted worldwide in 2009". 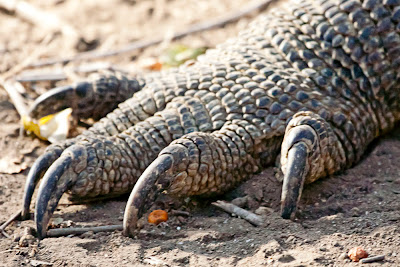 The lizards have also been known to consume human corpses, digging up bodies from shallow graves.  This habit of raiding graves caused the villagers of Komodo to move their graves from sandy soil to clay ground and pile rocks on top of them to deter the lizards. 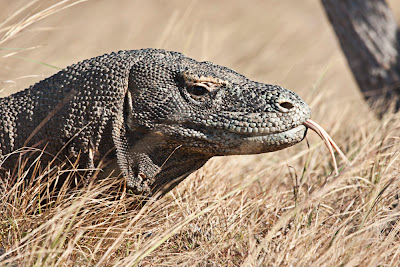 Dan Vaughn
Hello - I'm Dan my wife Karen and I lease a house in the village of Ubud, Bali, Indonesia. I write this blog to give people who rent from us more information about the House, the village of Ubud, the island of Bali and greater Indonesia. Even if you are not renting from us there may be something of interest for you here if you enjoy traveling...